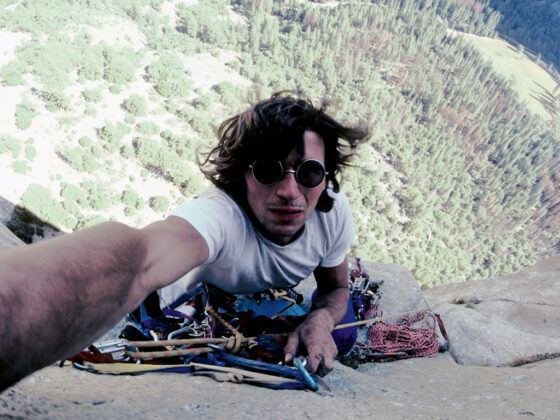 Reinhard Karl was the first German to scale Mount Everest. He also broke through the grade 6 climbing limit and broke new ground in mountain photography and alpine literature. He dropped out and scrambled up, he could and wanted to do so much more than repair cars. In climbing and mountaineering he discovered a vehicle within which and through which he could further evolve. He completed the long search for himself at the summit of Mount Fitz Roy, a mere few months before his death. In 2021 he would celebrate his seventy-fifth birthday. 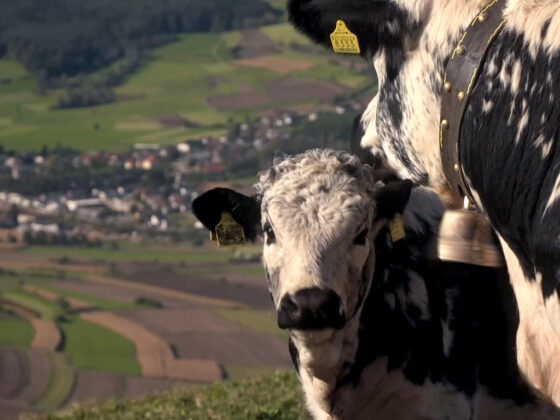 The Black Alpine Pig, the Tyrolese Blue Goat, the Racka Sheep, Tyrolese Gray Cattle and the Tyrolese Crested Chicken – all of them are the last of their kind. It is not only rhinos, cheetahs and tigers who are threatened by extinction. Even in the Alps, 133 of the 170 or so indigenous livestock breeds are considered endangered. Why not have a closer look at the way in which for generations, Tyrolean farm animals have adapted to changing circumstances and needs, to a local environment that made them robust and in which they feel comfortable? 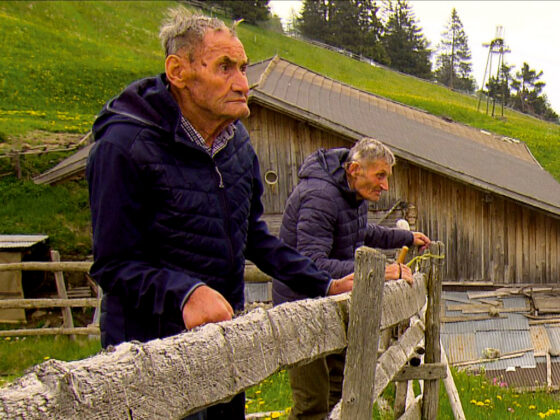 When Traudl, the Jocher Guest House’s landlady, wants to leave the Vigiljoch Pass, a world collapses for Hons (89) and Giedl (88). They have lived there together for 60 years and can no longer imagine life without Traudl. They know nothing but their lonely, sparse life on the mountain pass. Nevertheless, Traudl decides to take the two of them with her and to find an apartment in the valley for them as well as for her 94-year-old mother. Will this social experiment succeed? How will they cope with their farewell from the mountain pass? Can they settle into a life in the valley? 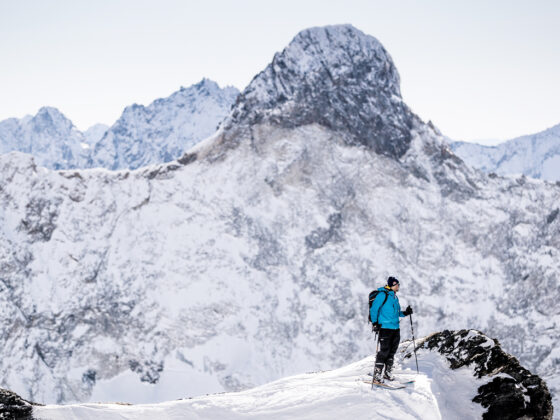 Andrzej Bargiel is not necessarily one of the big names in ski mountaineering. Yet in 2018 he conquers K2 without bottled oxygen and dares an audacious descent on skis from summit to base camp. After an ascent of 60-plus hours, he carves his mark into the rock and ice flanks of this giant mountain. A show of strength that requires superhuman physical and mental prowess, but also a tireless crew to accompany the extreme mountaineer. 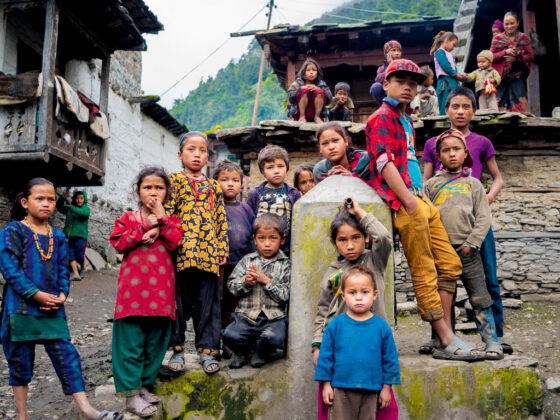 They are barely six years old when they are separated from their families to go to school in a remote town. Before they fully grow up, the children have to hike home once unassisted, up to their villages, high up in the Himalayas. They meet their families there, often for the first time in ten years. They get to know their traditional way of life and make peace with those who had to give them up in order to grant them a better life later on.
The documentary has already received numerous awards. 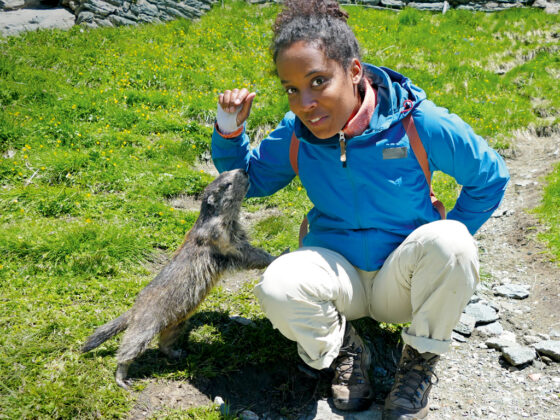 Ice-covered peaks and dangerously steep slopes: high mountains are not an ideal environment for every animal, and plants also tend to have a hard time here. Together with ranger Steffi, Pia goes in search of the “king of the Alps”. She traces signs of spring and discovers the diverse flora of the Alps: soft cushion plants, bright blue gentian and of course the rare edelweiss. All plants have cool survival tricks which help them bloom in the high mountains. At Berchtesgaden National Park, Pia moreover discovers a bird of prey who adores avalanches! 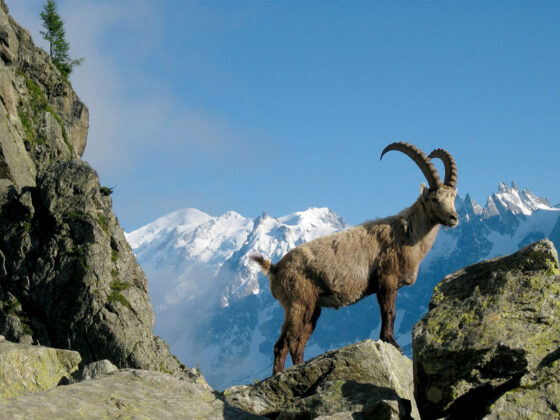 Between the peaks of the Gran Paradiso Massif, the moon, mountains and ibexes seem to join for a dance. In the evening, these animals suddenly come to life, begin to jump euphorically, romp downhill in an intoxicating vortex. Heaven and earth revolve, making this film a vision between dream and reality, surrounded by wind, clouds and mountains. 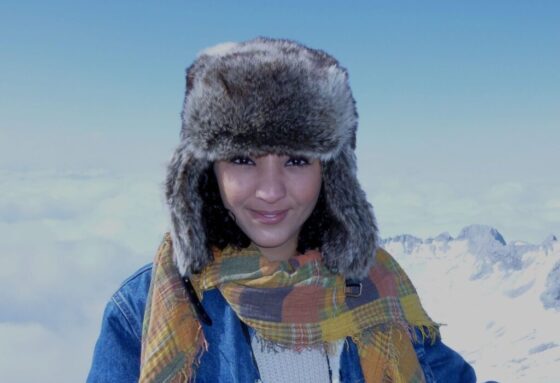 The Schneeferner on Mount Zugspitze is Germany’s highest glacier. Scientists fear it may disappear without a trace within the next twenty years, because the ice is melting even up there. But why is that so? What are the consequences for us humans? And above all – can the glacier be saved after all? 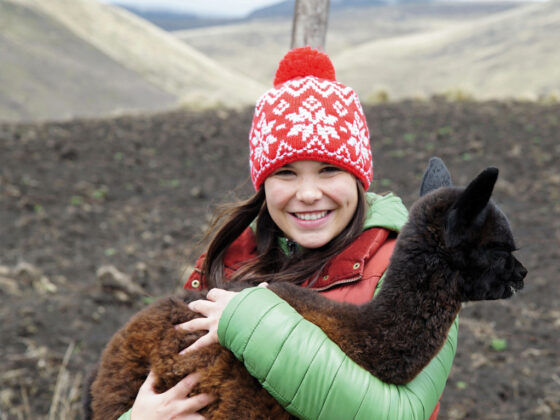 Where may I find the ibex, please? Straight up the mountain! When Anna faces these large-horned animals for the first time at Innsbruck’s Alpine Zoo, she is fascinated. A hundred years ago, the supposed “healing power” of their horns almost led to the species’ extinction. Today, the ibex is back. The excitement mounts when Anna witnesses how young ibexes are released into freedom. 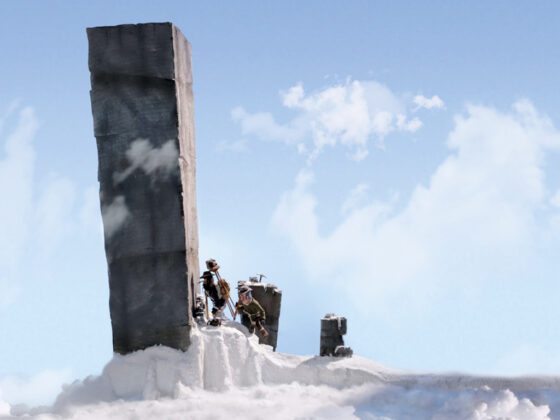 A well-heeled mountaineer’s hobby is to “collect” the highest peaks. He is still missing one: the ascent of this one inaccessible mountain. He wants to reach its summit, no matter the cost. A wife is fed up with waiting at home for her husband to return from his mountain adventures. She sets out on her own, choosing an easier route. But as a woman, she has to face completely different obstacles. The two fates interlink en route during this unique animated film set in the early days of mountaineering. 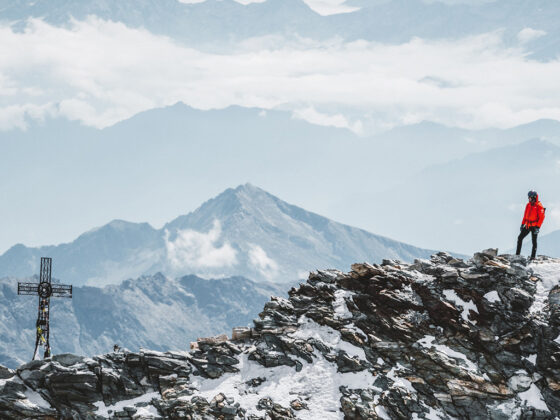 The Lion Ridge onto Mount Matterhorn is one of the Alps’ royal routes. It caters a breath-taking tour onto the famous peak, not only for Hervé Barmasse. En route, he casts many glances back at the fascinating history of the Matterhorn’s first ascents. 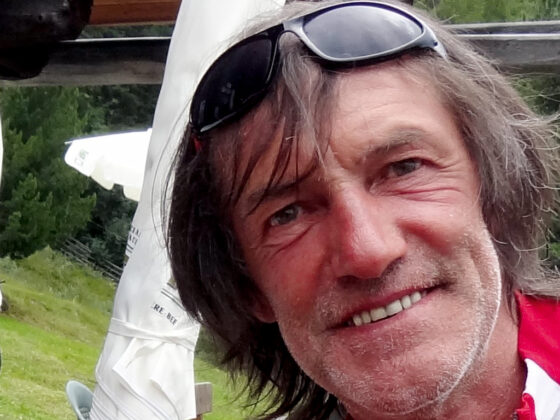 The South Tyrolean Hans Kammerlander is one of the most successful extreme mountaineers of the past 40 years. He has scaled 13 eight-thousanders and has descended from both Nanga Parbat and Mount Everest on skis. Despite his great successes as an alpinist, he has also had to cope with severe low blows on and off the mountain. 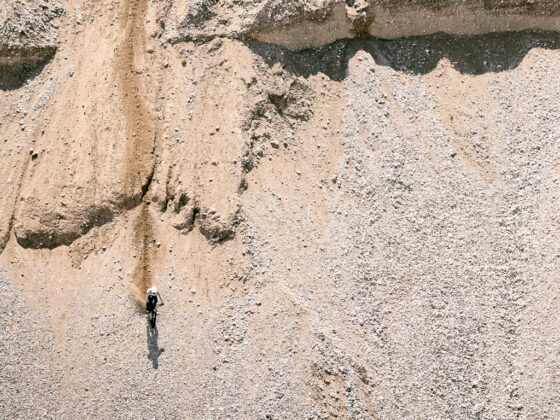 During the pandemic, we were encouraged to go into seclusion. However, there is a huge difference between being alone and being lonely. Staying in motion and spending time in nature calms and frees the mind. 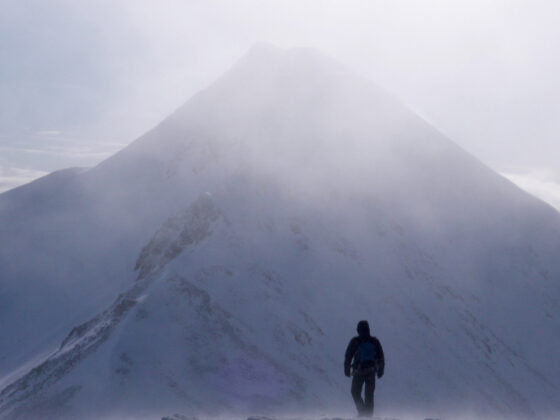 Two students decide to travel to Iceland in March 2020. Their goal is to climb Mount Baula. However, during their trip, the Covid pandemic hits Europe and cancels their mountaineering dream. They are suddenly stranded and struggle to find a way home. 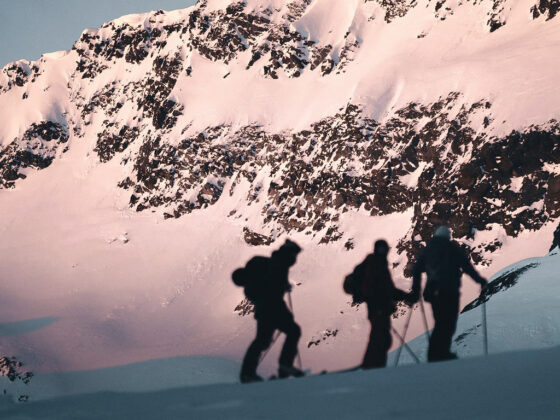 A few days before the Corona lockdown in March 2020, the Mountain Tribe Crew set out towards the Ötztal Alps. Their destination is an old border hut on the Timmelsjoch Pass. There, they want to explore the limits of friendship while tackling some ski touring and big lines. But the undertaking turns into a border crossing of a different kind. On Friday, March 13th, the international situation suddenly changes drastically. Initially, the gang jokes around and strums the Corona blues on a guitar, a few days later an awful sense of emergency descends upon them. 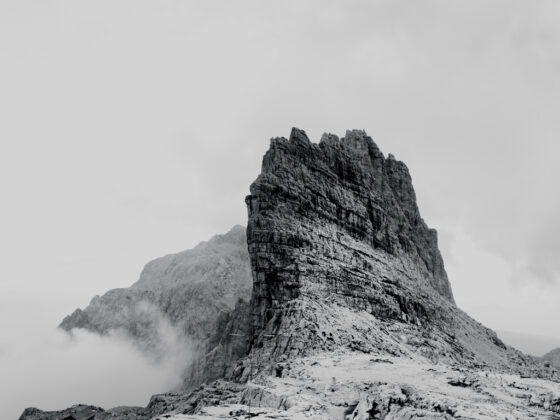 In the 1950s Otto Guggenbichler was a young, ambitious member of the Bavarian Public Broadcasting (BR) staff, first in connection to radio, then television. As early as 1952 he reported on the newly founded mountain film festival in Trento. At the time, he first heard the song “La Montanara”, sung by a Trentino mountaineering choir. In 1962 he shot a remarkable landscape film with this title, which was later sold in 52 countries. Impressive images, a successful combination of culture and nature in the Trentino, numerous mountaineering feats in the Brenta Group as well as elegant and humorous texts – this film established its reputation as a pioneer of landscape film. 40 years later, Guggenbichler succeeded in creating a mountain film festival based on the Trentino model in his native town of Tegernsee. 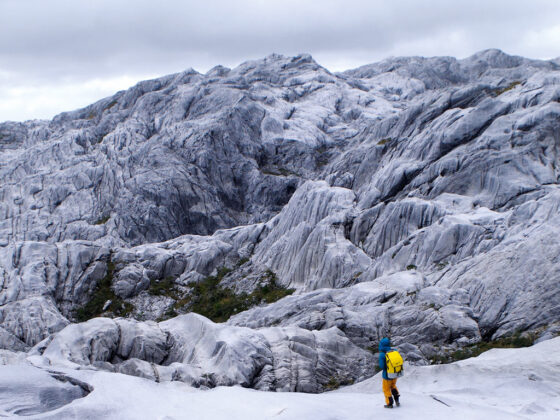 A boat on the ocean, tossed by the swell. About forty people on board defy the storm. They are on their way to Patagonia, to the Chilean island of Madre de Dios, which is 25 miles long and 15 miles wide. This expanse is haunted by howling winds and exposed to rain three hundred days a year. On the island, the scientists explore marble caverns, vast underground caves and a jungle that resembles a science fiction backdrop. 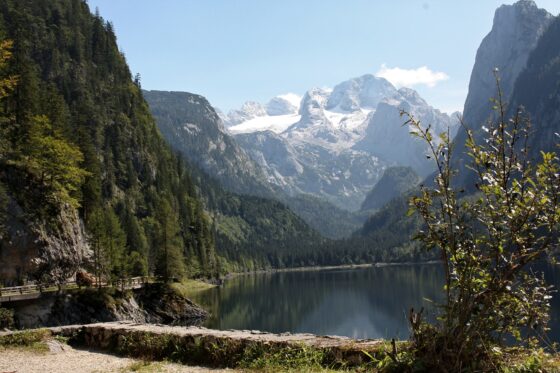 This comprehensive portrait of Mount Dachstein covers historical and current alpine aspects. The Dachstein is the highest mountain across the two federal states of Upper Austria and Styria, as the border between the two states runs directly across the summit. In addition, almost all relevant historical, scientific and literary references to the Dachstein are mentioned. 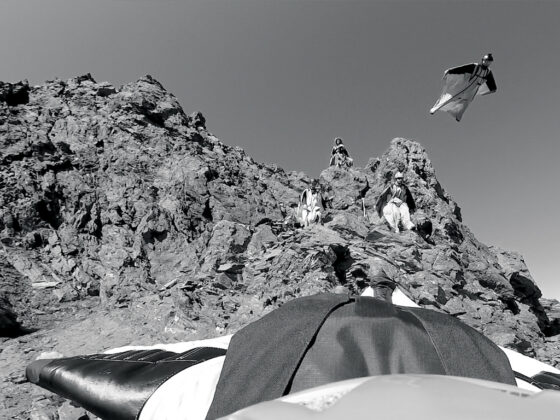 Wingsuiting is often portrayed as a thrilling sport for “adrenaline junkies”. But there are also more contemplative, deeper aspects. David Walden and his friends discover these on their way through the mountains of New Zealand. Among heavenly landscapes they forget everyday life and surrender to a world in which there is only earth, air and flying.) 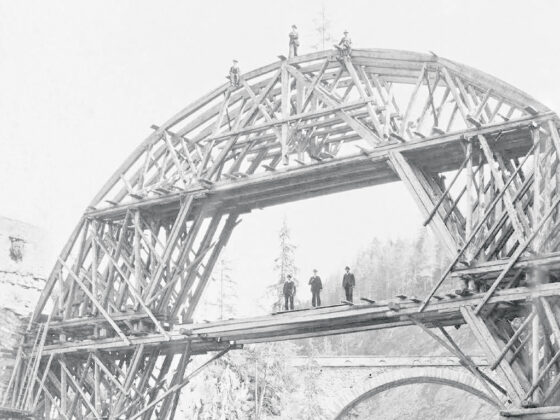 Richard Coray was a taciturn designer, a bold carpenter. With his scaffolding and auxiliary bridges, he created spectacular supporting structures, for example when the Rhaetian Railway was building new tracks towards alpine tourist resorts. He achieved world fame with his falsework. Interwoven with historical documents, a visual journey through time begins, which makes the life and work of the designer visible. 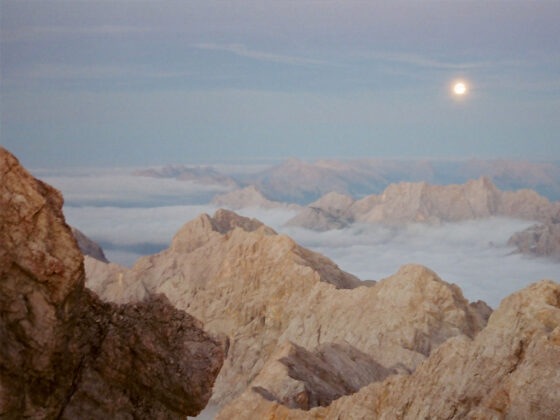 Twenty years ago, Jürgen Eichinger utilised his camera to portray Mount Zugspitze. Today he returns to the famous mountain to find out how much of a mark people and the climate have left here. His discovery: just a few decades of human influence have been sufficient to change the face of the mountain tremendously. A film about change, but also about the unique beauty of this mountain range.
Jürgen Eichinger has already received numerous awards. 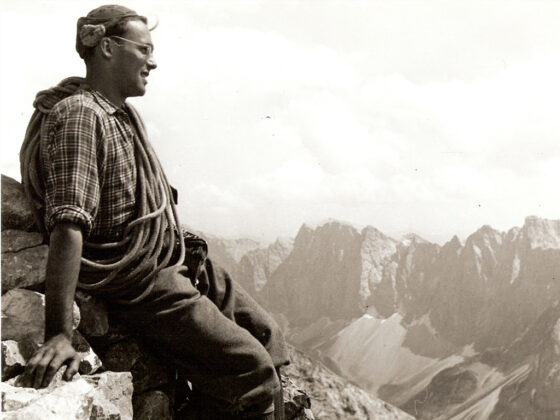 A zest for life, passion, curiosity and open-mindedness still characterise Hermann Huber today, at the age of 90. His travels took him around the world, where he mastered the most difficult tours. He is a phenomenon and has impacted on many technical developments from which climbers and mountaineers still benefit. Today he looks back on a rich, adventurous professional and mountain life.